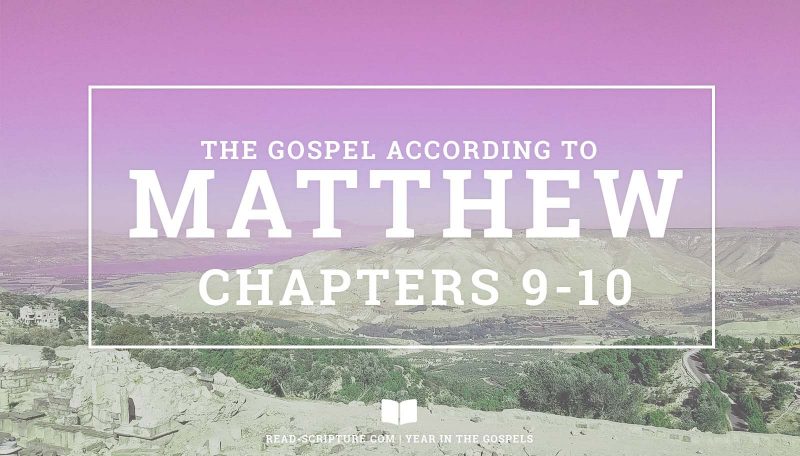 18 As he was saying these things, a leader came, bowed low before him, and said, “My daughter has just died, but come and lay your hand on her and she will live.” 19 Jesus and his disciples got up and followed him. 20 But a woman who had been suffering from a hemorrhage for twelve years came up behind him and touched the edge of his cloak. 21 For she kept saying to herself, “If only I touch his cloak, I will be healed.” 22 But when Jesus turned and saw her he said, “Have courage, daughter! Your faith has made you well.” And the woman was healed from that hour. 23 When Jesus entered the leader’s house and saw the flute players and the disorderly crowd, 24 he said, “Go away, for the girl is not dead but asleep!” And they began making fun of him. 25 But when the crowd had been forced outside, he went in and gently took her by the hand, and the girl got up. 26 And the news of this spread throughout that region.

27 As Jesus went on from there, two blind men began to follow him, shouting, “Have mercy on us, Son of David!” 28 When he went into the house, the blind men came to him. Jesus said to them, “Do you believe that I am able to do this?” They said to him, “Yes, Lord.” 29 Then he touched their eyes saying, “Let it be done for you according to your faith.” 30 And their eyes were opened. Then Jesus sternly warned them, “See that no one knows about this!” 31 But they went out and spread the news about him throughout that entire region.

32 As they were going away, a man who was demon-possessed and unable to speak was brought to him. 33 After the demon was cast out, the man who had been mute began to speak. The crowds were amazed and said, “Never has anything like this been seen in Israel!” 34 But the Pharisees said, “By the ruler of demons he casts out demons!”