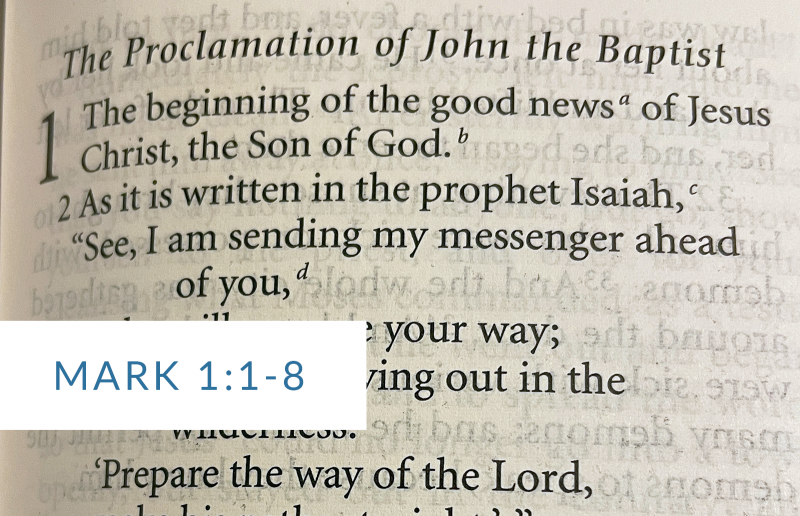 ‘The beginning of the good news of Jesus the Anointed, the Son of God.

As it is written in the prophet Isaiah, “Look, I am sending my messenger ahead of you, who will prepare your way,
the voice of one shouting in the wilderness, ‘Prepare the way for the Lord, make his paths straight.’”

In the desert John the Immerser began announcing an immersion of repentance for the letting-go of sins. People from the whole Judean countryside and all of Jerusalem were going out to him, and he was immersing them in the Jordan River as they admitted their sins. John wore camel’s hair with a leather belt around his waist, and he was eating locusts and wild honey. He announced:

“The one more powerful than me ˻is coming˼ behind me; I am not worthy to stoop down and untie the strap of his sandals. I immerse you in water, but he will immerse you in Holy Spirit.”’ (Mark 1:1–8)

beginning of the good news — Many English translations have “gospel.” The Greek word evangelion means “good news” or “good report.” It can range in meaning from an official

the Anointed — “Christ”. The Greek christos means “anointed-one.” It is the equivalent of the Hebrew mashiaḥ, or Messiah. In a Jewish context, this was seen as either the anointed king or high priest. The phrase “Jesus Christ” is a title: Jesus the Anointed One.

the prophet Isaiah — This quote is actually from two Hebrew prophets. The first portion is from Malachi, and the second is from Isaiah.

my messenger — In Hebrew “my messenger” is “malachi“, which is the name attributed to the author of the last book of the Hebrew Scriptures (or Old Testament) from which the quote derives.

John the Immerser — In our translation we have used the word ‘Immerser’ instead of Baptizer because in the first-century, for the original audience, the Greek work baptismo meant “to wash” or “to immerse.” While it could have religious usage when it came to purification washings, the word itself had no direct religious connotation. This is in contrast to our present culture, in which baptism has only religious usage. Our translation philosophy is to provide a translation as free as possible from terms that convey only modern religious ideas that are not present in the original languages.

repentance for the letting-go of sins — The Greek word for repentance is metanoia. It means a “change of viewpoint”, “change of idea.” It carries the notion of a change in the way we see things in such as a way as to also change behavior. In Greek translations of Hebrew texts, the Hebrew word is shuv, “to turn,” with the idea of “turning around” or “changing direction.”

The Greek for “letting-go” is aphesin, and is often translated forgiveness, which is an accurate translation of the usage. However, the Greek term can also be used for “releasing” or “letting go.” An example is the related Greek term afiemi, which is used when Jesus’ disciples “drop” or “forsake” their nets in Mark 1:18, 20.

more powerful than me is coming behind me —

he will immerse you in Holy Spirit —