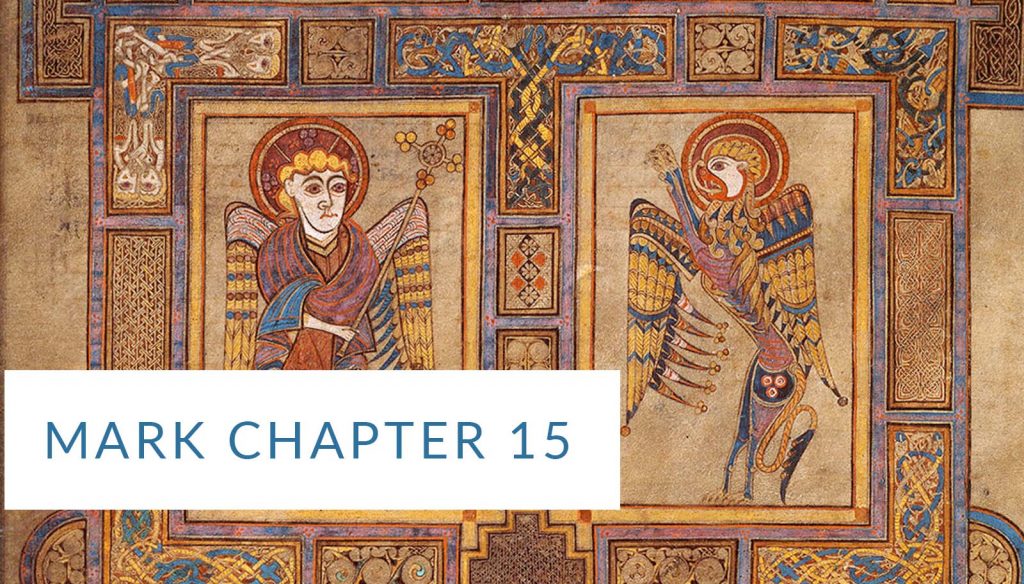 22 They brought Jesus to a place called Golgotha (which is translated, “Place of the Skull”). 23 They offered him wine mixed with myrrh, but he did not take it. 24 Then they crucified him and divided his clothes, throwing dice for them, to decide what each would take. 25 It was nine o’clock in the morning when they crucified him. 26 The inscription of the charge against him read, “The king of the Jews.” 27 And they crucified two outlaws with him, one on his right and one on his left. 29 Those who passed by defamed him, shaking their heads and saying, “Aha! You who can destroy the temple and rebuild it in three days, 30 save yourself and come down from the cross!” 31 In the same way even the chief priests—together with the experts in the law—were mocking him among themselves: “He saved others, but he cannot save himself! 32 Let the Christ, the king of Israel, come down from the cross now, that we may see and believe!” Those who were crucified with him also spoke abusively to him.

The Year in the Gospels podcast for this reading can be found here.

They brought Jesus to a place called Golgotha (which is translated, “Place of the Skull”)

Golgotha: As noted in Mark, Golgotha (golgolta) in Aramaic is "The Skull." It was likely an area outside the north-west city gates where crucifixions took place, likely near a main entrance road as crucifixion was meant to be seen as a warning to others. Traditionally, it is located where the Church of the Holy Sepulcher is now. The Latin word for "skull" is calvariae, which is where 'Calvary' is derived.

divided his clothes, throwing dice: A reference to Psalm 22.18 (from a Psalm which Jesus will quote later when he cries out 'Eloi! Eloi! Lama sabachthani'/'My God! My God! Why have you forsaken me?'). Psalm 22 is known as the 'Psalm of the Cross.' The song was written hundreds of years before Jesus. Traditionally, as a Psalm of David, it would have been almost 1000 years. It is a Psalm that begins in despair, but ends in victory and hope.

two outlaws: The Greek term here is 'thieves'/'brigands' (lēstas, the meaning is something like 'muggers' rather than someone simply stealing something). However, the historian Josephus uses the same term to refer to those individuals and groups that led rebellions against Rome and against Jewish leaders who supported Rome. Thievery was not a capital offense in the Roman empire, but rebellion was. It is likely that these two brigands were part of the growing anti-Roman groups. The NET translation chooses the word 'outlaws' to sort of bridge the gap between the two meanings of thieves and rebels. As such, the Marcan image of Jesus here is the suffering and rejected 'King of the Jews', with two rebels/outlaws at his right and left hand—a work of mockery by the Romans but a core element of the Gospel from the perspective of God's Kingdom.

Jimmy thanks for all this. I had never caught or thought of what the word "brought" meant here. I just visualized it like he was walking carrying his cross, but I think this makes sense that they were most likely carrying him because he was so wounded from the beatings before and that Simon was carrying his cross. Those reminders yesterday, so incredibly hard to read/see/think about. Makes me so emotional. I want to bury my head and not think on it much, but it is necessary for us to remember the evil within ourselves and what Jesus endured on our behalf.

So interesting, Jimmy. It makes sense that Jesus would be too weak to carry a heavy cross that long distance. I am still amazed that he even survived the beating. Also, so many mocking him. What an emotional toll that would take too. It would be so hard to keep moving or lash out in anger at their brutality. It’s also interesting to me that Mark mentions that both outlaws mocked Jesus and other gospels (can’t remember which one/ones) say that one defended him.