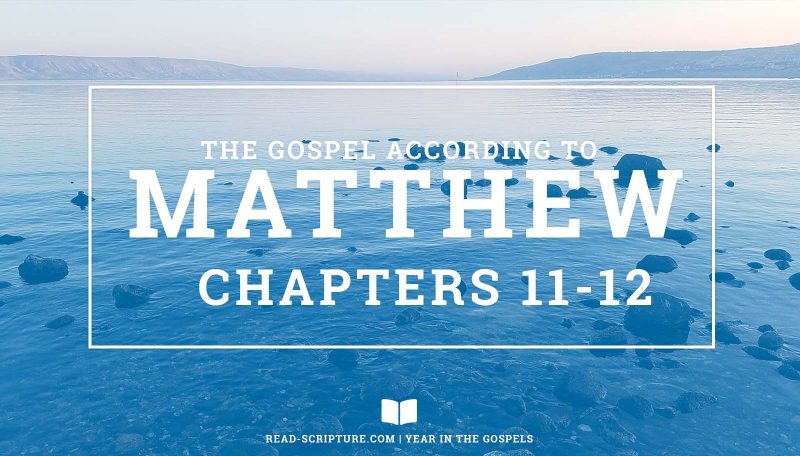 This week’s readings are from Matthew 11-12. Here are the daily readings:

11 When Jesus had finished instructing his twelve disciples, he went on from there to teach and preach in their towns.

2 Now when John heard in prison about the deeds Christ had done, he sent his disciples to ask a question: 3 “Are you the one who is to come, or should we look for another?” 4 Jesus answered them, “Go tell John what you hear and see: 5 The blind see, the lame walk, lepers are cleansed, the deaf hear, the dead are raised, and the poor have good news proclaimed to them 6 —and blessed is anyone who takes no offense at me!”

‘Look, I am sending my messenger ahead of you,
who will prepare your way before you.’

11 “I tell you the truth, among those born of women, no one has arisen greater than John the Baptist. Yet the one who is least in the kingdom of heaven is greater than he is! 12 From the days of John the Baptist until now the kingdom of heaven has suffered violence, and forceful people lay hold of it. 13 For all the prophets and the law prophesied until John appeared. 14 And if you are willing to accept it, he is Elijah, who is to come. 15 The one who has ears had better listen!

16 “To what should I compare this generation? They are like children sitting in the marketplaces who call out to one another,

25 At that time Jesus said, “I praise you, Father, Lord of heaven and earth, because you have hidden these things from the wise and intelligent, and have revealed them to little children. 26 Yes, Father, for this was your gracious will. 27 All things have been handed over to me by my Father. No one knows the Son except the Father, and no one knows the Father except the Son and anyone to whom the Son decides to reveal him. 28 Come to me, all you who are weary and burdened, and I will give you rest. 29 Take my yoke on you and learn from me, because I am gentle and humble in heart, and you will find rest for your souls. 30 For my yoke is easy to bear, and my load is not hard to carry.”

12 At that time Jesus went through the grain fields on a Sabbath. His disciples were hungry, and they began to pick heads of wheat and eat them. 2 But when the Pharisees saw this they said to him, “Look, your disciples are doing what is against the law to do on the Sabbath.” 3 He said to them, “Haven’t you read what David did when he and his companions were hungry— 4 how he entered the house of God and ate the sacred bread, which was against the law for him or his companions to eat, but only for the priests? 5 Or have you not read in the law that the priests in the temple desecrate the Sabbath and yet are not guilty? 6 I tell you that something greater than the temple is here. 7 If you had known what this means: ‘I want mercy and not sacrifice,’ you would not have condemned the innocent. 8 For the Son of Man is lord of the Sabbath.”

9 Then Jesus left that place and entered their synagogue. 10 A man was there who had a withered hand. And they asked Jesus, “Is it lawful to heal on the Sabbath?” so that they could accuse him. 11 He said to them, “Would not any one of you, if he had one sheep that fell into a pit on the Sabbath, take hold of it and lift it out? 12 How much more valuable is a person than a sheep! So it is lawful to do good on the Sabbath.” 13 Then he said to the man, “Stretch out your hand.” He stretched it out and it was restored, as healthy as the other. 14 But the Pharisees went out and plotted against him, as to how they could assassinate him.

15 Now when Jesus learned of this, he went away from there. Great crowds followed him, and he healed them all. 16 But he sternly warned them not to make him known. 17 This fulfilled what was spoken by the prophet Isaiah:

18 “Here is my servant whom I have chosen,
the one I love, in whom I take great delight.
I will put my Spirit on him, and he will proclaim justice to the nations.
19 He will not quarrel or cry out,
nor will anyone hear his voice in the streets.
20 He will not break a bruised reed or extinguish a smoldering wick,
until he brings justice to victory.
21 And in his name the Gentiles will hope.”

22 Then they brought to him a demon-possessed man who was blind and mute. Jesus healed him so that he could speak and see. 23 All the crowds were amazed and said, “Could this one be the Son of David?” 24 But when the Pharisees heard this they said, “He does not cast out demons except by the power of Beelzebul, the ruler of demons!” 25 Now when Jesus realized what they were thinking, he said to them, “Every kingdom divided against itself is destroyed, and no town or house divided against itself will stand. 26 So if Satan casts out Satan, he is divided against himself. How then will his kingdom stand? 27 And if I cast out demons by Beelzebul, by whom do your sons cast them out? For this reason they will be your judges. 28 But if I cast out demons by the Spirit of God, then the kingdom of God has already overtaken you. 29 How else can someone enter a strong man’s house and steal his property, unless he first ties up the strong man? Then he can thoroughly plunder the house. 30 Whoever is not with me is against me, and whoever does not gather with me scatters. 31 For this reason I tell you, people will be forgiven for every sin and blasphemy, but the blasphemy against the Spirit will not be forgiven. 32 Whoever speaks a word against the Son of Man will be forgiven. But whoever speaks against the Holy Spirit will not be forgiven, either in this age or in the age to come.

33 “Make a tree good and its fruit will be good, or make a tree bad and its fruit will be bad, for a tree is known by its fruit. 34 Offspring of vipers! How are you able to say anything good, since you are evil? For the mouth speaks from what fills the heart. 35 The good person brings good things out of his good treasury, and the evil person brings evil things out of his evil treasury. 36 I tell you that on the day of judgment, people will give an account for every worthless word they speak. 37 For by your words you will be justified, and by your words you will be condemned.”

43 “When an unclean spirit goes out of a person, it passes through waterless places looking for rest but does not find it. 44 Then it says, ‘I will return to the home I left.’ When it returns, it finds the house empty, swept clean, and put in order. 45 Then it goes and brings with it seven other spirits more evil than itself, and they go in and live there, so the last state of that person is worse than the first. It will be that way for this evil generation as well!”

46 While Jesus was still speaking to the crowds, his mother and brothers came and stood outside, asking to speak to him. 47  Someone told him, “Look, your mother and your brothers are standing outside wanting to speak to you.” 48 To the one who had said this, Jesus replied, “Who is my mother and who are my brothers?” 49 And pointing toward his disciples he said, “Here are my mother and my brothers! 50 For whoever does the will of my Father in heaven is my brother and sister and mother.”