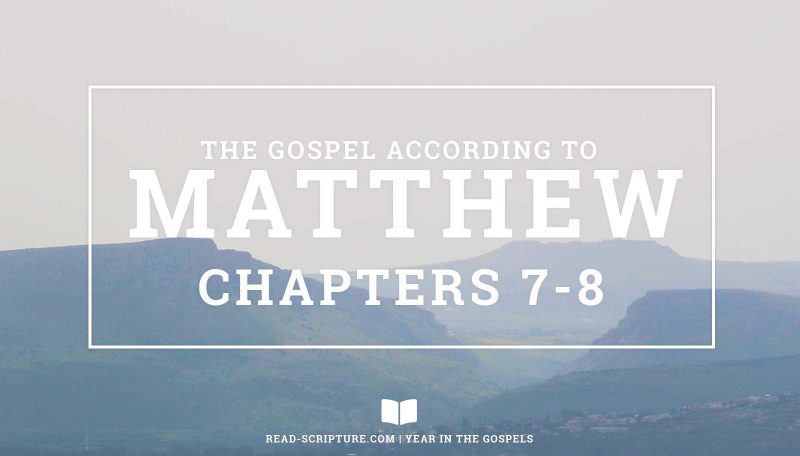 This week’s reading is two chapters: Matthew 7-8 These chapters are the last chapter of three of the Sermon on the Mount and the resumption of the narrative of Jesus’ work. The daily readings are:

7 “Do not judge so that you will not be judged. 2 For by the standard you judge you will be judged, and the measure you use will be the measure you receive. 3 Why do you see the speck in your brother’s eye, but fail to see the beam of wood in your own? 4 Or how can you say to your brother, ‘Let me remove the speck from your eye,’ while there is a beam in your own? 5 You hypocrite! First remove the beam from your own eye, and then you can see clearly to remove the speck from your brother’s eye. 6 Do not give what is holy to dogs or throw your pearls before pigs; otherwise they will trample them under their feet and turn around and tear you to pieces.

7 “Ask and it will be given to you; seek and you will find; knock and the door will be opened for you. 8 For everyone who asks receives, and the one who seeks finds, and to the one who knocks, the door will be opened. 9 Is there anyone among you who, if his son asks for bread, will give him a stone? 10 Or if he asks for a fish, will give him a snake? 11 If you then, although you are evil, know how to give good gifts to your children, how much more will your Father in heaven give good gifts to those who ask him! 12 In everything, treat others as you would want them to treat you, for this fulfills the law and the prophets.

15 “Watch out for false prophets, who come to you in sheep’s clothing but inwardly are voracious wolves. 16 You will recognize them by their fruit. Grapes are not gathered from thorns or figs from thistles, are they? 17 In the same way, every good tree bears good fruit, but the bad tree bears bad fruit. 18 A good tree is not able to bear bad fruit, nor a bad tree to bear good fruit. 19 Every tree that does not bear good fruit is cut down and thrown into the fire. 20 So then, you will recognize them by their fruit.

28 When Jesus finished saying these things, the crowds were amazed by his teaching, 29 because he taught them like one who had authority, not like their experts in the law.

8 After he came down from the mountain, large crowds followed him. 2 And a leper approached and bowed low before him, saying, “Lord, if you are willing, you can make me clean.” 3 He stretched out his hand and touched him saying, “I am willing. Be clean!” Immediately his leprosy was cleansed. 4 Then Jesus said to him, “See that you do not speak to anyone, but go, show yourself to the priest, and bring the offering that Moses commanded, as a testimony to them.”

5 When he entered Capernaum, a centurion came to him asking for help: 6 “Lord, my servant is lying at home paralyzed, in terrible anguish.” 7 Jesus said to him, “I will come and heal him.” 8 But the centurion replied, “Lord, I am not worthy to have you come under my roof! Instead, just say the word and my servant will be healed. 9 For I too am a man under authority, with soldiers under me. I say to this one, ‘Go!’ and he goes, and to another ‘Come!’ and he comes, and to my slave ‘Do this!’ and he does it.” 10 When Jesus heard this he was amazed and said to those who followed him, “I tell you the truth, I have not found such faith in anyone in Israel! 11 I tell you, many will come from the east and west to share the banquet with Abraham, Isaac, and Jacob in the kingdom of heaven, 12 but the sons of the kingdom will be thrown out into the outer darkness, where there will be weeping and gnashing of teeth.” 13 Then Jesus said to the centurion, “Go; just as you believed, it will be done for you.” And the servant was healed at that hour.

14 Now when Jesus entered Peter’s house, he saw his mother-in-law lying down, sick with a fever. 15 He touched her hand, and the fever left her. Then she got up and began to serve them. 16 When it was evening, many demon-possessed people were brought to him. He drove out the spirits with a word, and healed all who were sick. 17 In this way what was spoken by the prophet Isaiah was fulfilled:

“He took our weaknesses and carried our diseases.”

18 Now when Jesus saw a large crowd around him, he gave orders to go to the other side of the lake. 19 Then an expert in the law came to him and said, “Teacher, I will follow you wherever you go.” 20 Jesus said to him, “Foxes have dens, and the birds in the sky have nests, but the Son of Man has no place to lay his head.” 21 Another of the disciples said to him, “Lord, let me first go and bury my father.” 22 But Jesus said to him, “Follow me, and let the dead bury their own dead.”

23 As he got into the boat, his disciples followed him. 24 And a great storm developed on the sea so that the waves began to swamp the boat. But he was asleep. 25 So they came and woke him up saying, “Lord, save us! We are about to die!” 26 But he said to them, “Why are you cowardly, you people of little faith?” Then he got up and rebuked the winds and the sea, and it was dead calm. 27 And the men were amazed and said, “What sort of person is this? Even the winds and the sea obey him!”

28 When he came to the other side, to the region of the Gadarenes, two demon-possessed men coming from the tombs met him. They were extremely violent, so that no one was able to pass by that way. 29 They cried out, “Son of God, leave us alone! Have you come here to torment us before the time?” 30 A large herd of pigs was feeding some distance from them. 31 Then the demons begged him, “If you drive us out, send us into the herd of pigs.” 32 And he said, “Go!” So they came out and went into the pigs, and the herd rushed down the steep slope into the lake and drowned in the water. 33 The herdsmen ran off, went into the town, and told everything that had happened to the demon-possessed men. 34 Then the entire town came out to meet Jesus. And when they saw him, they begged him to leave their region.