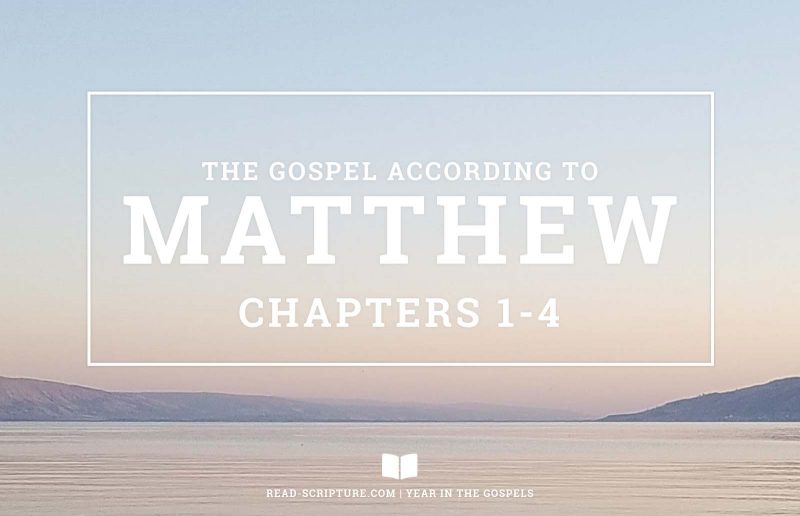 This week we begin the Gospel of Matthew. The reading is a bit more than normal: four chapters. Matthew 1-4 has many familiar stories: the birth of Jesus, the baptism, the temptation, introduction of Jesus’ message and work, and the calling of the first disciples. This week’s readings are:

18 Now the birth of Jesus the Messiah took place in this way. When his mother Mary had been engaged to Joseph, but before they lived together, she was found to be with child from the Holy Spirit. 19 Her husband Joseph, being a righteous man and unwilling to expose her to public disgrace, planned to dismiss her quietly. 20 But just when he had resolved to do this, an angel of the Lord appeared to him in a dream and said, “Joseph, son of David, do not be afraid to take Mary as your wife, for the child conceived in her is from the Holy Spirit. 21 She will bear a son, and you are to name him Jesus, for he will save his people from their sins.” 22 All this took place to fulfill what had been spoken by the Lord through the prophet:

23 “Look, the virgin shall conceive and bear a son,
and they shall name him Emmanuel,”

which means, “God is with us.” 24 When Joseph awoke from sleep, he did as the angel of the Lord commanded him; he took her as his wife, 25 but had no marital relations with her until she had borne a son; and he named him Jesus.

2 In the time of King Herod, after Jesus was born in Bethlehem of Judea, wise men from the East came to Jerusalem, 2 asking, “Where is the child who has been born king of the Jews? For we observed his star at its rising, and have come to pay him homage.” 3 When King Herod heard this, he was frightened, and all Jerusalem with him; 4 and calling together all the chief priests and scribes of the people, he inquired of them where the Messiah was to be born. 5 They told him, “In Bethlehem of Judea; for so it has been written by the prophet:

6 ‘And you, Bethlehem, in the land of Judah,
are by no means least among the rulers of Judah;
for from you shall come a ruler
who is to shepherd my people Israel.’”

7 Then Herod secretly called for the wise men and learned from them the exact time when the star had appeared. 8 Then he sent them to Bethlehem, saying, “Go and search diligently for the child; and when you have found him, bring me word so that I may also go and pay him homage.” 9 When they had heard the king, they set out; and there, ahead of them, went the star that they had seen at its rising, until it stopped over the place where the child was. 10 When they saw that the star had stopped, they were overwhelmed with joy. 11 On entering the house, they saw the child with Mary his mother; and they knelt down and paid him homage. Then, opening their treasure chests, they offered him gifts of gold, frankincense, and myrrh. 12 And having been warned in a dream not to return to Herod, they left for their own country by another road.

13 Now after they had left, an angel of the Lord appeared to Joseph in a dream and said, “Get up, take the child and his mother, and flee to Egypt, and remain there until I tell you; for Herod is about to search for the child, to destroy him.” 14 Then Joseph got up, took the child and his mother by night, and went to Egypt, 15 and remained there until the death of Herod. This was to fulfill what had been spoken by the Lord through the prophet, “Out of Egypt I have called my son.”

16 When Herod saw that he had been tricked by the wise men, he was infuriated, and he sent and killed all the children in and around Bethlehem who were two years old or under, according to the time that he had learned from the wise men. 17 Then was fulfilled what had been spoken through the prophet Jeremiah:

18 “A voice was heard in Ramah,
wailing and loud lamentation,
Rachel weeping for her children;
she refused to be consoled, because they are no more.”

19 When Herod died, an angel of the Lord suddenly appeared in a dream to Joseph in Egypt and said, 20 “Get up, take the child and his mother, and go to the land of Israel, for those who were seeking the child’s life are dead.” 21 Then Joseph got up, took the child and his mother, and went to the land of Israel. 22 But when he heard that Archelaus was ruling over Judea in place of his father Herod, he was afraid to go there. And after being warned in a dream, he went away to the district of Galilee. 23 There he made his home in a town called Nazareth, so that what had been spoken through the prophets might be fulfilled, “He will be called a Nazorean.”

3 In those days John the Baptist appeared in the wilderness of Judea, proclaiming, 2 “Repent, for the kingdom of heaven has come near.” 3 This is the one of whom the prophet Isaiah spoke when he said,

“The voice of one crying out in the wilderness:
‘Prepare the way of the Lord,
make his paths straight.’”

4 Now John wore clothing of camel’s hair with a leather belt around his waist, and his food was locusts and wild honey. 5 Then the people of Jerusalem and all Judea were going out to him, and all the region along the Jordan, 6 and they were baptized by him in the river Jordan, confessing their sins.

7 But when he saw many Pharisees and Sadducees coming for baptism, he said to them, “You brood of vipers! Who warned you to flee from the wrath to come? 8 Bear fruit worthy of repentance. 9 Do not presume to say to yourselves, ‘We have Abraham as our ancestor’; for I tell you, God is able from these stones to raise up children to Abraham. 10 Even now the ax is lying at the root of the trees; every tree therefore that does not bear good fruit is cut down and thrown into the fire.

11 “I baptize you with water for repentance, but one who is more powerful than I is coming after me; I am not worthy to carry his sandals. He will baptize you with the Holy Spirit and fire. 12 His winnowing fork is in his hand, and he will clear his threshing floor and will gather his wheat into the granary; but the chaff he will burn with unquenchable fire.”

13 Then Jesus came from Galilee to John at the Jordan, to be baptized by him. 14 John would have prevented him, saying, “I need to be baptized by you, and do you come to me?” 15 But Jesus answered him, “Let it be so now; for it is proper for us in this way to fulfill all righteousness.” Then he consented. 16 And when Jesus had been baptized, just as he came up from the water, suddenly the heavens were opened to him and he saw the Spirit of God descending like a dove and alighting on him. 17 And a voice from heaven said, “This is my Son, the Beloved, with whom I am well pleased.”

4 Then Jesus was led up by the Spirit into the wilderness to be tempted by the devil. 2 He fasted forty days and forty nights, and afterwards he was famished. 3 The tempter came and said to him, “If you are the Son of God, command these stones to become loaves of bread.” 4 But he answered, “It is written,

‘One does not live by bread alone,
but by every word that comes from the mouth of God.’”

5 Then the devil took him to the holy city and placed him on the pinnacle of the temple, 6 saying to him, “If you are the Son of God, throw yourself down; for it is written,

‘He will command his angels concerning you,’
and ‘On their hands they will bear you up,
so that you will not dash your foot against a stone.’”

7 Jesus said to him, “Again it is written, ‘Do not put the Lord your God to the test.’”

8 Again, the devil took him to a very high mountain and showed him all the kingdoms of the world and their splendor; 9 and he said to him, “All these I will give you, if you will fall down and worship me.” 10 Jesus said to him, “Away with you, Satan! for it is written,

‘Worship the Lord your God,
and serve only him.’”

11 Then the devil left him, and suddenly angels came and waited on him.

12 Now when Jesus heard that John had been arrested, he withdrew to Galilee. 13 He left Nazareth and made his home in Capernaum by the sea, in the territory of Zebulun and Naphtali, 14 so that what had been spoken through the prophet Isaiah might be fulfilled:

15 “Land of Zebulun, land of Naphtali,
on the road by the sea, across the Jordan, Galilee of the Gentiles—
16 the people who sat in darkness
have seen a great light,
and for those who sat in the region and shadow of death
light has dawned.”

17 From that time Jesus began to proclaim, “Repent, for the kingdom of heaven has come near.”

18 As he walked by the Sea of Galilee, he saw two brothers, Simon, who is called Peter, and Andrew his brother, casting a net into the sea—for they were fishermen. 19 And he said to them, “Follow me, and I will make you fish for people.” 20 Immediately they left their nets and followed him. 21 As he went from there, he saw two other brothers, James son of Zebedee and his brother John, in the boat with their father Zebedee, mending their nets, and he called them. 22 Immediately they left the boat and their father, and followed him.

23 Jesus went throughout Galilee, teaching in their synagogues and proclaiming the good news of the kingdom and curing every disease and every sickness among the people. 24 So his fame spread throughout all Syria, and they brought to him all the sick, those who were afflicted with various diseases and pains, demoniacs, epileptics, and paralytics, and he cured them. 25 And great crowds followed him from Galilee, the Decapolis, Jerusalem, Judea, and from beyond the Jordan.