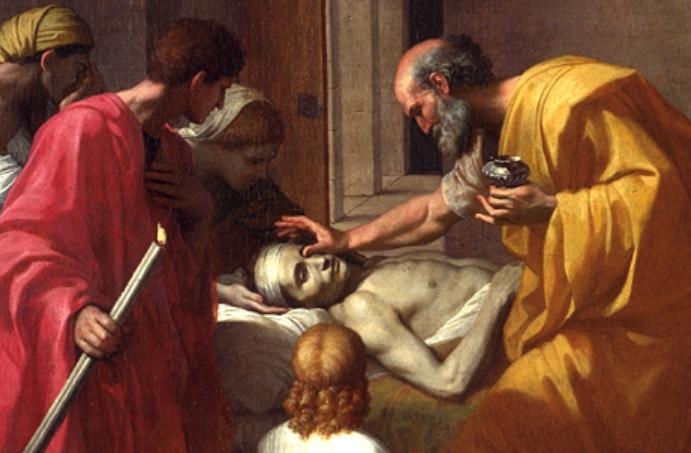 The use of oil is mentioned in Mark 6:13 in relation to casting out demons and healing. Here are some extra-biblical texts providing context for the use of olive oil for both.

In the Gospel of Mark, when Jesus send out the twelve apostles, one of the descriptions of their work is:

They cast out many demons and anointed many sick people with ˻olive˼ oil and healed them.

Though the Greek does not specifically say the oil was from olives (it simply says ‘oil’), it is likely that this was the case and translators add ‘olive’ for this reason. Olive oil was recognized as having both general health benefits and perhaps spiritual effectiveness regarding demons which caused illness. Philo, a Jewish philosopher living in Alexandria, Egypt during the first century CE, wrote:

Again: why need we seek for more in the way of ointment than the juice pressed out of the fruit of the olive? For that [oil] softens the limbs, and relieves the labour of the body, and produces a good condition of the flesh; and if anything has got relaxed or flabby, it binds it again, and makes it firm and solid, and it fills us with vigour and strength of muscle, no less than any other unguent.  (Dreams 2.58–59 PHILO-E)

Josephus records that as Herod Antipas was dying, his physicians tried to use warm oil to bring healing to him. Although this ultimately failed, it shows that there was some understanding that olive oil would have healing properties:

And here the physicians thought proper to bathe his [Herod Antipas’] whole body in warm oil, by letting it down into a large vessel full of oil; whereupon his eyes failed him, and he came and went as if he were dying, (1.33.5) and as a tumult was then made by his servants, at their voice he revived again.

Olive Oil as an Aid to Exorcism

The Testament of Solomon is a pseudepigraphal text that may date from the first centuries CE. It tells fanciful stories of how Solomon was given power over demonic forces. Though pseudepigraphal, it may give insight into understanding how demonic forces and exorcisms were understood during this period. In one segment, Solomon confronts  thirty-six elemental demonic powers ruling upon the upon the earth:

…And I commanded another demon to appear to me. And there came to me thirty-six elements. Their heads (were) as formless dogs. Among them were human forms, bull forms, beast forms, dragon forms, sphinx forms, bird forms. And having seen these things, I Solomon asked him, saying: “And who are you?” They together with one voice said: “We are the thirty-six elements, the world rulers of this age of darkness. (Sol_a 18.1–2 PSEUD-E)

Solomon challenges each of them, asking them to identify themselves. The thirtieth one responds:

“I am called Rhyx Physikoreth. I make long illnesses. If someone will cast salt into olive oil and smear the sick (person), saying, ‘Cherubim, Seraphim, help!’ immediately I depart.” (Sol_a 18.34 PSEUD-E)

Oil for Healing in the New Testament

In the New Testament, the book of James says concerning those who are ill:

Is anyone among you ill? He should summon the elders of the church, and they should pray for him and anoint him with olive oil in the name of the Lord. And the prayer of faith will save the one who is sick and the Lord will raise him up—and if he has committed sins, he will be forgiven. (James 5.14–15 NET)