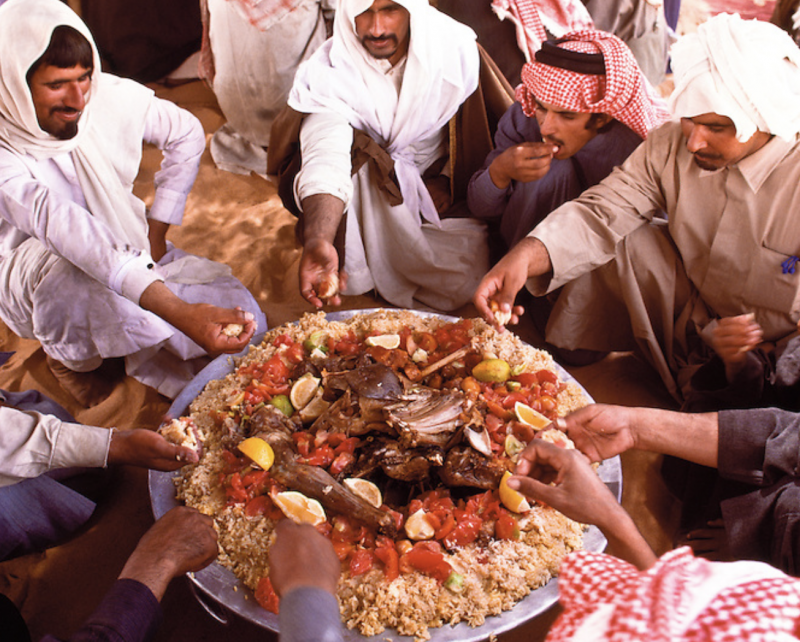 In Jesus’ context meals were not at tables with chairs. Meals were most often with people lying on the floor on pallets or slightly raised benches that would have been called “couches.” The food may have been on small raised tables in the center, or simply on the floor, likely on some kind of fabric floor covering (remember, the floor for most people would have been dirt or stone). Participants likely used their hands rather than utensils such as forks and spoons, and they ate from a shared dish (think about “it is he who dips his had with me”, Mark 14:20). It was common to only eat with one hand in particular, and, in many cultures even today, that would be the right hand.

Who, What, Where, and Identity

Some meals were formal, others festive, and others simply daily meals, but often meal structures and customs in all formats were very important. Where people sat, who did what and during what segment of the meal, what hands were used, who spoke, etc., could have great significance—and if not followed strictly, especially in more formal environments, they could have been very controversial, disruptive, or dishonoring. Typically, the person of honor at a meal had a special seat of honor. The host was often seated in the lowest status position. Who was invited and included in meals also mattered (often servants, women, children, and others would be excluded). Who was at the table became potential identity markers for the rest of the group. So, “eating with sinners” could identify someone or a group as “sinners” as well, which would be a great dishonor and, therefore, likely and potential loss of status.

Houses of common people were often small (only one or two rooms), and could not accommodate large groups. In such cases, larger meals would be held outside or possibly under tents. For those with more wealth, they may have had room for triclinium meals in a single room or in multiple rooms, or they may have had a large courtyard where meals would take place. The foods of meals also varied according to means. Those in poverty might have eaten mostly vegetables, beans or lentils, olives, fruit, eggs, nuts, honey, and bread, and perhaps birds or fish. Those with more wealth could add meats: goat, lamb, beef (and for non-Jews, pork). Large festive meals in all cases would indicate some form of meat, even for the poor. Some form of wine or other fermented drink, or juice, would likely be served.

It is also to be noted that skeletal remains from the period and region show many people had severe tooth decay even at young ages, and many had no teeth in their older age. Soft foods (foods similar to hummus and softened bread, soups, stews with tender meat) may have been common.

In the first century, it was common for participants to lie down while eating a festive meal, and they often would lie close to one another and even against one another. As such, meals could be very intimate between friends and family. This was true for Jesus and his disciples, as well, as at the final meal before Jesus’ crucifixion the ‘disciple whom Jesus loved’ is described as “the one lying on Jesus’ chest” (John 13:25; 21:20).

In Mark 2 we see the same sort of meal described. A close translation of Mark 2:3-17 reads like this:

Jesus went out again by the sea. The whole crowd came to him, and he taught them. Going along, he saw Levi, the son of Alphaeus, sitting at the tax booth. And he says to him, “Follow me.” And getting up, he followed him. As he was lying down in his house, many tax collectors and sinners were lying down with Jesus and his disciples, for there were many who followed him. When the scribes and the Pharisees saw that he’s eating with sinners and tax collectors, they began saying to his disciples, “Why is he eating with tax collectors and sinners?” When Jesus heard this he says to them, “Those who are healthy don’t need a healer, but those who are sick do. I have not come to invite the righteous, but sinners.” (Mark 2:13–17, emphasis added)

Note that where many translations have something like “he was having a meal in his home, many tax collectors and sinners were eating with Jesus and his disciples,” the Greek has “he was lying-around in his house…and [they] were lying-around with Jesus and his disciples.” Translators make their choice to use “having a meal” because they want modern audiences to understand the context of what that means. Some translations have “while reclining at the meal.”

With all this in mind, we might imagine this meal with the group, or clusters of friends, lying around and eating with much conversation. Maybe there was some music. Perhaps singing, recitations, and story-telling. Knowing Jesus’ stories, maybe some laughter at the humor—especially depending on the amount of wine or fermented drink! Houses were close together. The smell of the food and sounds coming from a courtyard or even from within a house with no real window or door coverings could be heard easily by neighbors. Such a meal would not have been a private occasion. Jesus and his disciples were “lying-around” and eating with “sinners”—and everyone knew it.

For Jesus, this was a banquet of the kingdom of God. Maybe a pre-picture of the banquet to come.