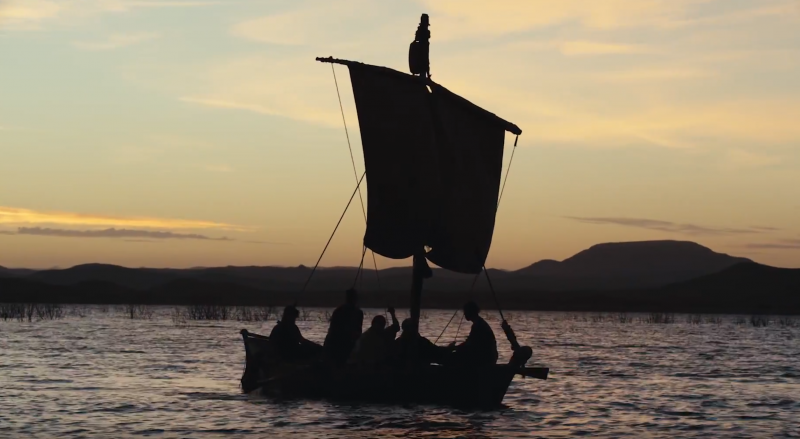 Below is the account from all four Gospels of the calling of Peter and Andrew.

“As he went along the Sea of Galilee, he saw Simon and Andrew, Simon’s brother, casting a net into the sea (for they were fishermen). Jesus said to them, “Follow me, and I will turn you into fishers of people!” They left their nets immediately and followed him. Going on a little farther, he saw James, the son of Zebedee, and John his brother in their boat mending nets. Immediately he called them, and they left their father Zebedee in the boat with the hired men and followed him.” (Mark 1:16–20 NET)

“As he was walking by the Sea of Galilee he saw two brothers, Simon (called Peter) and Andrew his brother, casting a net into the sea (for they were fishermen). He said to them, “Follow me, and I will turn you into fishers of people!” They left their nets immediately and followed him. Going on from there he saw two other brothers, James the son of Zebedee and his brother John, in a boat with their father Zebedee, mending their nets. Then he called them. They immediately left the boat and their father and followed him.” (Matthew 4:18–22 NET)

“Now Jesus was standing by the Lake of Gennesaret, and the crowd was pressing around him to hear the word of God. He saw two boats by the lake, but the fishermen had gotten out of them and were washing their nets. He got into one of the boats, which was Simon’s, and asked him to put out a little way from the shore. Then Jesus sat down and taught the crowds from the boat. When he had finished speaking, he said to Simon, “Put out into the deep water and lower your nets for a catch.” Simon answered, “Master, we worked hard all night and caught nothing! But at your word I will lower the nets.” When they had done this, they caught so many fish that their nets started to tear. So they motioned to their partners in the other boat to come and help them. And they came and filled both boats, so that they were about to sink. But when Simon Peter saw it, he fell down at Jesus’ knees, saying, “Go away from me, Lord, for I am a sinful man!” For Peter and all who were with him were astonished at the catch of fish that they had taken, and so were James and John, Zebedee’s sons, who were Simon’s business partners. Then Jesus said to Simon, “Do not be afraid; from now on you will be catching people!” So when they had brought their boats to shore, they left everything and followed him.” (Luke 5:1–11 NET)

“Again the next day John was standing there with two of his disciples. Gazing at Jesus as he walked by, he said, “Look, the Lamb of God!” When John’s two disciples heard him say this, they followed Jesus. Jesus turned around and saw them following and said to them, “What do you want?” So they said to him, “Rabbi” (which is translated Teacher), “where are you staying?” Jesus answered, “Come and you will see.” So they came and saw where he was staying, and they stayed with him that day. Now it was about four o’clock in the afternoon.

Andrew, the brother of Simon Peter, was one of the two disciples who heard what John said and followed Jesus. He first found his own brother Simon and told him, “We have found the Messiah!” (which is translated Christ). Andrew brought Simon to Jesus. Jesus looked at him and said, “You are Simon, the son of John. You will be called Cephas” (which is translated Peter).” (John 1:35–42 NET)