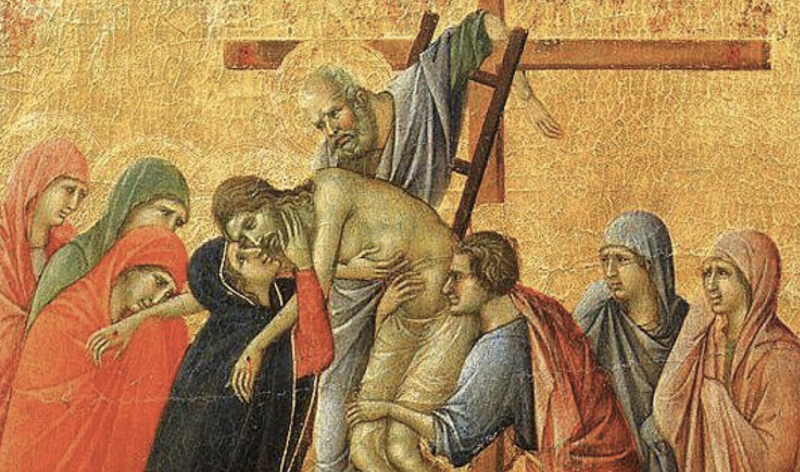 As evening approached, there came a rich man from Arimathea, named Joseph, who had himself become a disciple of Jesus.Going to Pilate, he asked for Jesus’ body, and Pilate ordered that it be given to him.Joseph took the body, wrapped it in a clean linen cloth,and placed it in his own new tomb that he had cut out of the rock. He rolled a big stone in front of the entrance to the tomb and went away.Mary Magdalene and the other Mary were sitting there opposite the tomb.

It was Preparation Day (that is, the day before the Sabbath). So as evening approached,Joseph of Arimathea, a prominent member of the Council, who was himself waiting for the kingdom of God, went boldly to Pilate and asked for Jesus’ body.Pilate was surprised to hear that he was already dead. Summoning the centurion, he asked him if Jesus had already died.When he learned from the centurion that it was so, he gave the body to Joseph.So Joseph bought some linen cloth, took down the body, wrapped it in the linen, and placed it in a tomb cut out of rock. Then he rolled a stone against the entrance of the tomb.Mary Magdalene and Mary the mother of Joses saw where he was laid.

Now there was a man named Joseph, a member of the Council, a good and upright man,who had not consented to their decision and action. He came from the Judean town of Arimathea and he was waiting for the kingdom of God.Going to Pilate, he asked for Jesus’ body.Then he took it down, wrapped it in linen cloth and placed it in a tomb cut in the rock, one in which no one had yet been laid.It was Preparation Day, and the Sabbath was about to begin.

The women who had come with Jesus from Galilee followed Joseph and saw the tomb and how his body was laid in it.Then they went home and prepared spices and perfumes. But they rested on the Sabbath in obedience to the commandment.

Later, Joseph of Arimathea asked Pilate for the body of Jesus. Now Joseph was a disciple of Jesus, but secretly because he feared the Jews. With Pilate’s permission, he came and took the body away.He was accompanied by Nicodemus, the man who earlier had visited Jesus at night. Nicodemus brought a mixture of myrrh and aloes, about seventy-five pounds.Taking Jesus’ body, the two of them wrapped it, with the spices, in strips of linen. This was in accordance with Jewish burial customs.At the place where Jesus was crucified, there was a garden, and in the garden a new tomb, in which no one had ever been laid.Because it was the Jewish day of Preparation and since the tomb was nearby, they laid Jesus there.