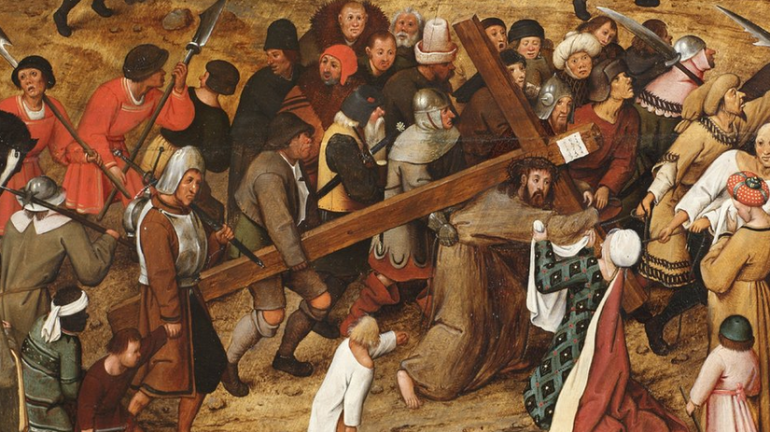 According to the Gospels, Jesus has been arrested and tried by both the Sanhedrin and Pilate (and questioned by Herod).  He has had no sleep.  He has been scourged. He has been betrayed and abandoned by friends and followers, rejected by a crowd of people, exchanged for a murderer, and near this time, sometime before 9:00 AM in the morning, the scriptures tell us:

And the soldiers led him away inside the palace (that is, the governor’s headquarters), and they called together the whole battalion.And they clothed him in a purple cloak, and twisting together a crown of thorns, they put it on him.And they began to salute him, “Hail, King of the Jews!”And they were striking his head with a reed and spitting on him and kneeling down in homage to him.And when they had mocked him, they stripped him of the purple cloak and put his own clothes on him. And they led him out to crucify him.

And they compelled a passerby, Simon of Cyrene, who was coming in from the country, the father of Alexander and Rufus, to carry his cross.And they brought him to the place called Golgotha (which means Place of a Skull).

And there followed him a great multitude of the people and of women who were mourning and lamenting for him.But turning to them Jesus said, “Daughters of Jerusalem, do not weep for me, but weep for yourselves and for your children.For behold, the days are coming when they will say, ‘Blessed are the barren and the wombs that never bore and the breasts that never nursed!’Then they will begin to say to the mountains, ‘Fall on us,’ and to the hills, ‘Cover us.’For if they do these things when the wood is green, what will happen when it is dry?”