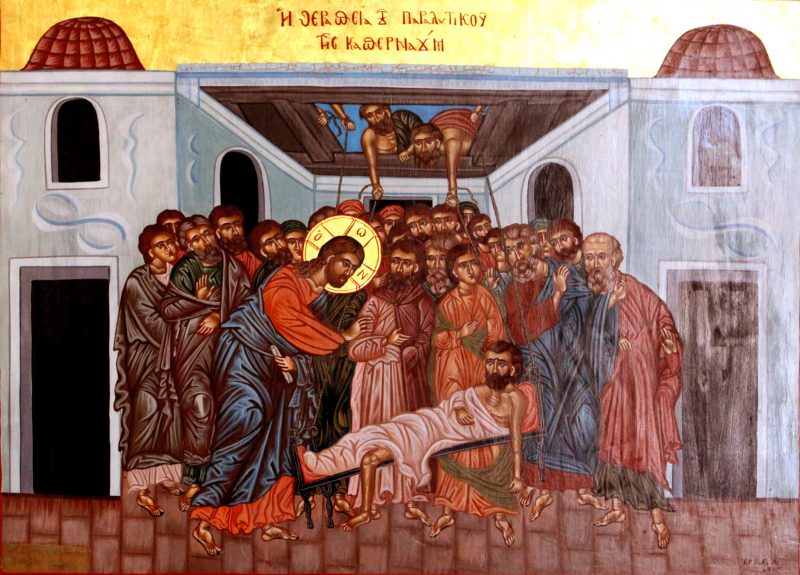 In the first century, it was common to believe that sickness was due to sin (either the individual’s, their family’s, tribe, nation, etc). In that light, healing, forgiveness, and repentance were see to be connected. The Talmud, which was written much later but records and reflects views current with Jesus, contains a conversation among hte rabbis:

As is written, “…and his heart will understand, and he will return [repent] and will be cured” (Isa. 6:10). If so, one should say [the blessing for] “Healing” after [that for] “Repentance.” Do not think this way, as is written, “…and he will return to God and He will have mercy on him, and to our God, who forgives greatly” (Isa. 55:7). And what did you see that you relied on that, rely on this: Another verse wrote: “…who forgives all your sins, who cures all your illnesses, who redeems your lives from the pit” (Psa. 103:3-4). Is that to say that “Redemption” and “Healing” should come after “Forgiveness”? For it is written, “and he will return [repent] and he will cure him” (Isa. 6:10) That [verse] is not [talking] about healing illnesses, but healing [that leads to] forgiveness.

In another place in the Talmud, it is stated (again using Psalm 103:3-4, as an order to the healing process):

Rabbi Alexandri in the name of Rabbi Hiyya bar Abba, “A sick person does not recover from his ailment before all of his sins are forgiven: ‘Who forgives all your sins, who heals all your diseases’ (Psa. 103:3).”

Forgiveness and Healing by a Person

Though the scribes had issues with Jesus’ actions, there were other streams of Judaism in the first-century that may not have had difficulty with Jesus saying that the man was forgiven. Among the Dead Sea Scrolls there is a text (4Q242, known as the “Prayer of Nabonidus”) that records a Babylonian ruler being healed and forgiven by an exorcist among the Jewish exiles:

“The words of the pra[y]er of Nabonidus, king of [Ba]bylon, [the great] kin[g, when he was smitten] with a severe inflammation at the command of G[o]d, in Teima. [I, Nabonidus,] was smitten [with a severe inflammation] lasting seven years. Beca[use] I was thus changed, [becoming like a beast, I prayed to the Most High,] and an exorcist forgave my sins. He was a Jew, in fact, a mem[ber of the community of exiles—came to me and said,] “Declare and write down this story, and so ascribe glory and gre[at]ness to the name of G[od Most High.” Accordingly, I have myself written it down:] I was smitten with a severe inflammation while in Teima, [by the command of God Most High. Then] for seven years I continued praying [to] the gods made of silver and gold, [bronze, iron,] wood, stone, and clay, for I [used to th]ink that th[ey] really were gods.” (4Q242 f1_3:1–8)

Note that here, too, Nabonidus’ illness is caused by sin.

The Greek word for  “to forgive” (afiēmi) has many uses. It means “to let go, throw, hurl, cast, send forth…throw away, abandon, unburden…release…”, just as a start. As an example of how this word and its related terms can be used, here are examples of how Mark has already used this word several times in Mark 1.

Mark 1:18 And right-away they let-go of the nets and followed him.

Mark 1:20 And right-away he called them, and letting-go of/abandoning their father, Zebedee in the boat with the hired-hands they went-way behind him.

Mark 1:31 And coming he raised her up by firmly taking her hand. Then the fever let-go-of her/released her and she began to serve them.

Mark 1:34 But he would not let-go/release the demons to speak, because they knew him.

A major emphasis in Jewish culture is the idea of release: release from debt, from sin, slavery, oppression, etc. This is probably a good approach to understanding a New Testament understanding of forgiveness.