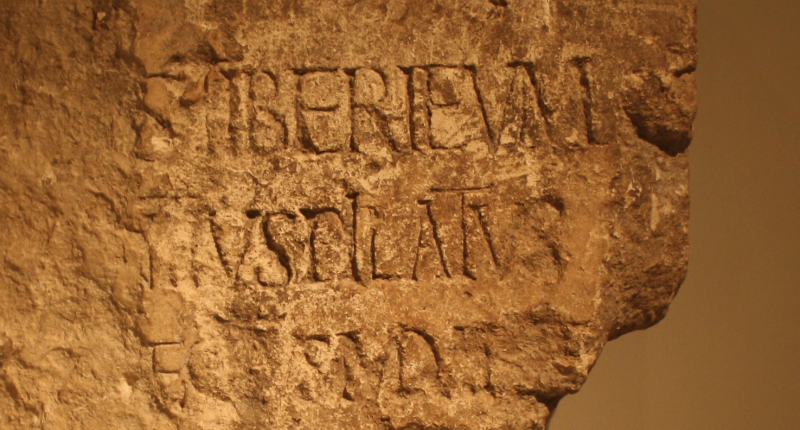 Below are references to Pontius Pilate in Josephus and Philo of Alexandria Egypt, two first-century Jewish sources:

[Tiberias] was now the third emperor; and he sent Valerius Gratus to be procurator of Judea, and to succeed Annius Rufus. (18.2.2) This man deprived Ananus of the high priesthood, and appointed Ismael, the son of Phabi, to be high priest. He also deprived him in a little time, and ordained Eleazar, the son of Ananus, who had been high priest before, to be high priest: which office, when he had held for a year, Gratus deprived him of it, and gave the high priesthood to Simon, the son of Camithus; (18.2.2) and when he had possessed that dignity no longer than a year, Joseph Caiaphas was made his successor. When Gratus had done those things, he went back to Rome, after he had tarried in Judea eleven years, when Pontius Pilate came as his successor.

(18.3.1) But now Pilate, the procurator of Judea, removed the army from Cesarea to Jerusalem, to take their winter quarters there, in order to abolish the Jewish laws. So he introduced Caesar’s effigies, which were upon the ensigns, and brought them into the city; whereas our law forbids us the very making of images; (18.3.1) on which account the former procurators were wont to make their entry into the city with such ensigns as had not those ornaments. Pilate was the first who brought those images to Jerusalem, and set them up there; which was done without the knowledge of the people, because it was done in the nighttime; (18.3.1) but as soon as they knew it, they came in multitudes to Cesarea, and interceded with Pilate many days, that he would remove the images; and when he would not grant their requests, because it would tend to the injury of Caesar, while yet they persevered in their request, on the sixth day he ordered his soldiers to have their weapons privately, while he came and sat upon his judgment seat, which seat was so prepared in the open place of the city, that it concealed the army that lay ready to oppress them: (18.3.1) and when the Jews petitioned him again, he gave a signal to the soldiers to encompass them round, and threatened that their punishment should be no less than immediate death, unless they would leave off disturbing him, and go their ways home. (18.3.1) But they threw themselves upon the ground, and laid their necks bare, and said they would take their death very willingly, rather than the wisdom of their laws should be transgressed; upon which Pilate was deeply affected with their firm resolution to keep their laws inviolable, and presently commanded the images to be carried back from Jerusalem to Cesarea.

(18.3.2) But Pilate undertook to bring a current of water to Jerusalem, and did it with the sacred money, and derived the origin of the stream from the distance of two hundred furlongs. However the Jews were not pleased with what had been done about this water; and many ten thousands of the people got together, and made a clamor against him, and insisted that he should leave off that design. Some of them also used reproaches, and abused the man, as crowds of such people usually do. (18.3.2) So he habited a great number of his soldiers in their habit, who carried daggers under their garments, and sent them to a place where they might surround them. So he bade the Jews himself go away; but they boldly casting reproaches upon him, he gave the soldiers that signal which had been beforehand agreed on; (18.3.2) who laid upon them much greater blows than Pilate had commanded them, and equally punished those that were tumultuous, and those that were not, nor did they spare them in the least; and since the people were unarmed, and were caught by men prepared for what they were about, there were a great number of them slain by this means, and others of them ran away wounded; and thus an end was put to this sedition. (18.3.3) Now, there was about this time Jesus, a wise man, if it be lawful to call him a man, for he was a doer of wonderful works—a teacher of such men as receive the truth with pleasure. He drew over to him both many of the Jews, and many of the Gentiles. He was [the] Christ; (18.3.3) and when Pilate, at the suggestion of the principal men amongst us, had condemned him to the cross, those that loved him at the first did not forsake him, for he appeared to them alive again the third day, as the divine prophets had foretold these and ten thousand other wonderful things concerning him; and the tribe of Christians, so named from him, are not extinct at this day.

(18.4.1) But the nation of the Samaritans did not escape without tumults. The man who excited them to it, was one who thought lying a thing of little consequence, and who contrived everything so, that the multitude might be pleased; so he bade them get together upon Mount Gerizzim, which is by them looked upon as the most holy of all mountains, and assured them that, when they were come thither, he would show them those sacred vessels which were laid under that place, because Moses put them there. (18.4.1) So they came thither armed, and thought the discourse of the man probable; and as they abode at a certain village, which was called Tirathaba, they got the rest together to them, and desired to go up the mountain in a great multitude together. (18.4.1) But Pilate prevented their going up, by seizing upon the roads with a great band of horsemen and footmen, who fell upon those that were gotten together in the village; and when they came to an action, some of them they slew, and others of them they put to flight, and took a great many alive, the principal of whom, and also the most potent of those that fled away, Pilate ordered to be slain. (18.4.2) But when this tumult was appeased, the Samaritan senate sent an embassy to Vitellius, a man that had been consul, and who was now president of Syria, and accused Pilate of the murder of those that were killed; for that they did not go to Tirathaba in order to revolt from the Romans, but to escape the violence of Pilate. (18.4.2) So Vitellius sent Marcellus, a friend of his, to take care of the affairs of Judea, and ordered Pilate to go to Rome, to answer before the emperor to the accusation of the Jews. So Pilate, when he had tarried ten years in Judea, made haste to Rome, and this in obedience to the orders of Vitellius, which he durst not contradict; but before he could get to Rome, Tiberius was dead.

(18.6.5) And, as a farther attestation to what I say of the dilatory nature of Tiberius, I appeal to this his practice itself; for although he was emperor twenty-two years, he sent in all but two procurators to govern the nation of the Jews,—Gratus, and his successor in the government, Pilate.

(2.9.2) Now Pilate, who was sent as procurator into Judea by Tiberius, sent by night those images of Caesar that are called Ensigns, into Jerusalem. (2.9.2) This excited a very great tumult among the Jews when it was day; for those that were near them were astonished at the sight of them, as indications that their laws were trodden underfoot: for those laws do not permit any sort of image to be brought into the city. Nay, besides the indignation which the citizens themselves had at the procedure, a vast number of people came running out of the country. (2.9.2) These came zealously to Pilate to Caesarea, and besought him to carry those ensigns out of Jerusalem, and to preserve them their ancient laws inviolable; but upon Pilate’s denial of their request, they fell down prostrate upon the ground, and continued immovable in that posture for five days and as many nights. (2.9.3) On the next day Pilate sat upon his tribunal, in the open market place, and called to him the multitude, as desirous to give them an answer; and then gave a signal to the soldiers that they should all by agreement at once encompass the Jews with their weapons; (2.9.3) so the band of soldiers stood round about the Jews in three ranks. The Jews were under the utmost consternation at that unexpected sight. Pilate also said to them, that they should be cut in pieces, unless they would admit of Caesar’s images; and gave intimation to the soldiers to draw their naked swords. (2.9.3) Hereupon the Jews, as it were at one signal, fell down in vast numbers together, and exposed their necks bare, and cried out that they were sooner ready to be slain, than that their law should be transgressed. Hereupon Pilate was greatly surprised at their prodigious superstition, and gave order that the ensigns should be presently carried out of Jerusalem. (2.9.4) After this he raised another disturbance, by expending that sacred treasure which is called Corban upon aqueducts, whereby he brought water from the distance of four hundred furlongs. At this the multitude had great indignation; and when Pilate was come to Jerusalem, they came about his tribunal, and made a clamor at it. (2.9.4) Now when he was apprised aforehand of this disturbance, he mixed his own soldiers in their armor with the multitude, and ordered them to conceal themselves under the habits of private men, and not indeed to use their swords, but with their staves to beat those that made the clamor. He then gave the signal from his tribunal (to do as he had bidden them). (2.9.4) Now the Jews were so sadly beaten, that many of them perished by the stripes they received, and many of them perished as trodden to death, by which means the multitude was astonished at the calamity of those that were slain, and held their peace.